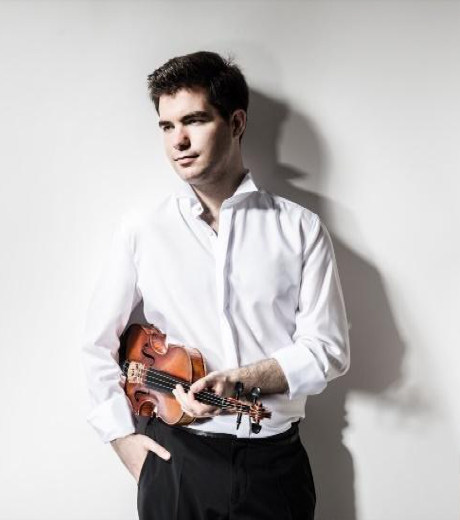 The Czech violin virtuoso Milan Al-Ashhab is dazzling audiences with his musical sensitivity and technical virtuosity.

In September 2019, Milan Al-Ashhab makes his debut in China, performing the Mendelssohn Violin Concerto in the ancient city of Nanjing at the acclaimed Forest Festival with Jiangsu Symphony Orchestra. During September 2019, he also undertakes a 7-day solo recital tour of the U.K. and returns to tour the U.K. in 2020 with the Martinu Strings Prague chamber ensemble.

Last season, Milan Al-Ashhab dazzled the Viennese music public with his performance of the Shostakovich Violin Concerto No. 1 in A minor in Vienna at the renowned Musikverein concert hall  with the ORF Vienna Radio Symphony Orchestra. September 2018 saw Milan begin awarded the First Prize at Vienna’s prestigious Fritz Kreisler International Violin Competition in Austria.  Along with a monetary prize, as stated on the competitions website, the competition first prize winner, will receive an invitation for a guest solo performance with the Vienna Philharmonic Orchestra – plus a number of other important concert engagements and CD recording opportunity. Milan Al-Ashhab is also prize-winner of the Tchaikovsky Violin Competition.

Milan Al-Ashhab made his New York-American concert debut in August 2018 in the Merkin Concert Hall at the Kaufman Music Center. Previously, in May 2018 in New York, Milan Al-Ashhab was unanimously awarded First Prize at the New York Concert Artists competition.

Milan has performed recitals and concertos with orchestra’s both in the Czech Republic and abroad, he has appeared with the Janáček Philharmonic Ostrava, the Hofer Symphoniker, the Europera Jugend Orchestra, the L'Armonia Terrena, and others.

Milan is a graduate of the Most Music School (Czech Republic) having studied with Květoslava Hasilová, and from the Prague Academy of Music, where he studied with the Czech Republic’s leading violin teachers,  Ivan Štraus. He undertook post-graduate studies in Vienna at the Universität für Musik und darstellende kunst (University of Music and Performing Arts, Vienna) with Peter Schuhmayer.

Milan Al-Ashhab performs on a Francesco Gobetti (Venezia 1711) on loan from the Maggini Stiftung in Langenthal, Switzerland.

The Last Rose of Summer