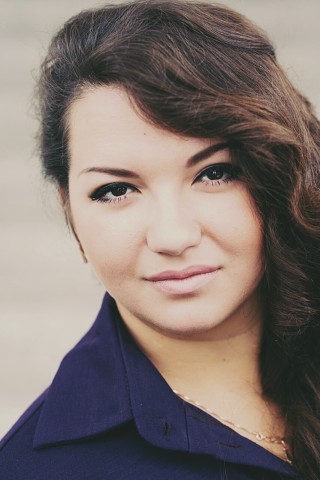 Yulia Mennibaeva studied under the guidance of Victor Minakov; then, from 2005 to 2010 with soprano Galina Pisarenko at the Moscow Tchaikovsky Conservatory, and graduated from the Academy of Choral Arts with Dmitry Vdovin.

Her career begun with her debut in the opera Orfeo ed Euridice. Furthermore, since 2010 she has been performing as soloist with the Kolobov Novaya Opera Theatre in Moscow, where she has sung important roles including: Fenena in Nabucco; Dido in Dido and Aeneas; Maddalena in Rigoletto; Third Nymph in Rusalka; Olga in Eugene Onegin; Kontchakovna in Prince Igor; Tisbe in La Cenerentola; Feodor in Boris Godunov; Spring in The Snow Maiden; Myrtale in Thais; and Laura in Iolanta.

She has also had an intense concert activity including: Coronation Cantata by Glazunov at the Festival of the World Orchestras in Moscow; The Armed Man by Karl Jenkins in the Great Hall of the Moscow Conservatory; Gloria by Vivaldi and Mozart's Requiem at the Moscow Philharmonic; Petite Messe Solennelle by Rossini at the Yaroslavl Philharmonic; the Alexander Nevsky Cantata by Sergei Prokofiev at the Novaya Opera; and the final Winners’ Concert of the Viñas Competition at the Teatro Real de Madrid.

During Season 2016/2017 of the Opernhaus Zurich, Yulia was soloist of the International Opera Studio. She performed the roles of: Lola in Cavalleria Rusticana; Emilia in Otello, and La Tasse Chinoise / La Libellule in L’enfant et les sortilèges.

In September 2017 Yulia took part in a training course in l’Academie de l’Opera de Monte-Carlo, where she prepared the part of Carmen. In December 2017 she performed Amelfa in Rimsky- Korsakov’s The Golden Cockerel conducted by Vasily Petrenko in Concertgebouw (Amsterdam).

In February 2019 she performed Ulrica in Verdi’s Un ballo in maschera conducted by Daniel Oren in Israeli Opera (Tel-Aviv).

Her awards in competitions include: II Prize Winner and special prize for the best performance of Russian music at the International Competition Francisco Viñas in Barcelona, in Spain, 2016; the prize ‘For bright start in the Art’ from the Elena Obraztsova Foundation in Moscow, 2016; and special prize ‘City of Crema’ at the International Competition of Portofino, in Italy, 2017. She represented Russia in the BBC Cardiff Singer of the World in 2019.